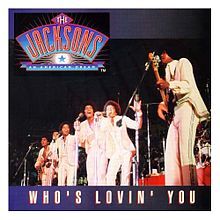 Who's Lovin' You is one of The Jackson 5 songs in the albums, Diana Ross Presents The Jackson 5 and Greatest Hits. This song was released in October 7, 1969 and was recorded in Hitsville USA (Studio A) in 1969. This song was produced by Bobby Taylor and Michael Jackson was the lead singer with his brothers being the background vocals.[1]

In Diana Ross Presents The Jackson 5

Retrieved from "https://michael-jackson.fandom.com/wiki/Who%27s_Lovin%27_You?oldid=15451"
Community content is available under CC-BY-SA unless otherwise noted.