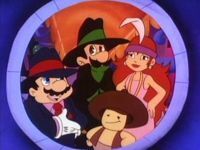 The Unzappables is the 31st episode of The Super Mario Bros. Super Show!, that was aired on October 25, 1989 and was written by Perry Martin.[1]

This song had a cover that was played in the episode where Mario, Luigi, Princess Toadstool, and Toad are fighting Mouser, Koopa Troopa, Tryclyde, and King Koopa. The main conflict in the episode can relate to Michael Jackson's Beat It music video, where there is gang violence.[2]