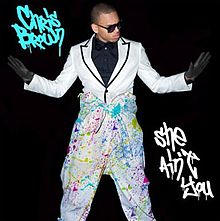 She Ain't You is a song and single by American recording artist, Chris Brown. It was released on March 28, 2011 and was recorded in Stadium Red Studios (New York City; New York). It was written by Chris Brown, Jean Baptiste, Ryan Buendia, Kevin McCall, Jason Boyd, John Bettis, Steve Porcaro, and Brian Morgan and was produced by Free School.

This song samples one of Michael Jackson's songs, Human Nature.[1]

The music video was directed by Colin Tilley and was premiered on May 2, 2011. It's copyrighted as "(C) 2011 JIVE Records, a unit of Sony Music Entertainment". This music video is a dedication of Michael Jackson. It says in the beginning of the music video:

Dedicated to my biggest inspiration of all time...

The music video also shows Chris Brown dressing up and dancing like Michael Jackson in the Smooth Criminal music video.[2]

Retrieved from "https://michael-jackson.fandom.com/wiki/She_Ain%27t_You?oldid=9197"
Community content is available under CC-BY-SA unless otherwise noted.