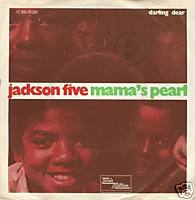 Mama's Pearl is a song and single by The Jackson 5 that's in the albums, Third Album and Greatest Hits. It was released on January 7, 1971 in the US. and was recorded in July of 1970 in Hitsville West, Los Angeles. This song was written by Berry Gordy, Jr., Alphonzo Mitzell, Deke Richards, and Freddie Perren and was produced by The Corporation. It's featured in the Jackson 5ive episode, A Rare Pearl.[1][2]

It broke the group's run of no.1's in the US; peaked no.2 on both charts, prevented from topping the Hot 100 by One Bad Apple - performed in the classic Jackson 5 style by the Osmonds. It peaked at #25 in the UK.

The single has a rarer mix, slightly different to the album version, most noticeable on Tito's opening backing vocals - this mix would have been included on the album, had it been completed in time. Versions with alternate vocal takes featured on the Jackson 5's 1986 compilation, Anthology, and on The Jacksons Story compilation in 2004 - the latter featured the mono version 'folded' back into the stereo version.

Retrieved from "https://michael-jackson.fandom.com/wiki/Mama%27s_Pearl?oldid=5400"
Community content is available under CC-BY-SA unless otherwise noted.