The Dangerous World Tour was the fourth worldwide solo concert tour by Michael Jackson. The tour, sponsored by Pepsi-Cola, included 70 performances. All profits were donated to various charities including Jackson's own "Heal the World Foundation." The tour ran from June 27, 1992 to November 11, 1993.

In November 1993, Jackson ended the tour due to, as he announced, illness that required hospitalization. The performer became dependent on painkillers, having suffered from dehydration, migraines and injuries. Originally, the Dangerous World Tour was supposed to run until Christmas of 1993.

Following the huge success of the Bad world tour, Michael Jackson's third solo world tour, where he earned $125 million, the star claimed that he would not tour again, and would instead concentrate on making films and records. On February 3, 1992, in a Pepsi press conference, it was announced that Jackson would be touring again. The announcement coincided with a new deal between Jackson and Pepsi, with a reported $20,000,000 deal to sponsor the tour.

In an interview, Jackson stated, "The only reason I am going on tour is to raise funds for the newly-formed Heal the World Foundation, an international children's charity, that I am spearheading to assist children and the ecology. My goal is to gross $100,000,000 by Christmas 1993. I urge every corporation and individual who cares about this planet and the future of the children to help raise money for the charity. The Heal the World Foundation will contribute funds to pediatric AIDS in honor of my friend Ryan White. I am looking forward to this tour because it will allow me to devote time to visiting children all around the world, as well as spread the message of global love, in the hope that others will be moved to do their share to help heal the world."

Here is an (currently incomplete) list of full, near-full, and snippets of concerts of the Dangerous Tour:

10/02/92: Izmir, Turkey, İzmir Atatürk Stadium; Rescheduled for October 7, 1992. (due to tour restructuring - later was cancelled due to health problems)

10/04/92: Istanbul, Turkey, İnönü Stadium; CANCELLED (Jackson arrived in Istanbul 2 October. Five hours before Jackson was due to perform, an announcement was made that, due to a vocal cord ailment, the concert had been cancelled.) During the same tour he later performed in Istanbul, Turkey 23 September 1993.

The European leg of the Dangerous World Tour ended after 37 of 42 planned dates (Gelsenkirchen, Basel, Istanbul, Izmir and Athens were the planned and cancelled dates during the first leg of the tour) due to Jackson’s ill health. Jackson rested for several weeks before flying to Tokyo to perform another 8 sold out shows at Tokyo Dome in 1992.

Jackson had also planned to end the 1992 Europe tour in Moscow Red Square, Russia. During the same tour he later performed in Moscow, Russia 15 September 1993.

08/15/93: Hong Kong, Sha Tin Racecourse; CANCELLED (Originally, the Dangerous World Tour was to begin in Hong Kong with shows on August 15 and 16. Those dates were cancelled and could not be rescheduled because it would conflict with the start of the racing season.

08/30/93: Singapore, National Stadium; Rescheduled for September 1, 1993. (Jackson collapsed before the show had begun.)

09/30/93: Johannesburg, South Africa; CANCELLED (Marcel Avram, a concert promoter, claimed that he had no contract with the local promoter and these concerts were cancelled due to continuing violence in South Africa.)

New Delhi, India, Jawaharlal Nehru Stadium, Delhi; CANCELLED (There were plans to give 2 concerts in India and these were supposed to be the last Dangerous World Tour concerts in December 1993.)

There were also plans to take the tour to Kuala Lumpur, Malaysia in November/December 1993.

The third leg of the Dangerous World Tour ended after 24 of circa 43 planned dates mainly due to Jackson’s severe ill health and the stress of the accusations made against him. 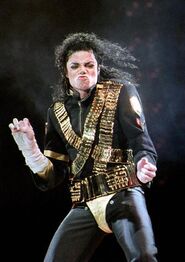 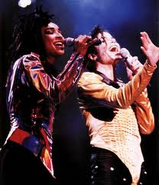 "I Just Can't Stop Loving You" with Siedah Garrett

"Will You Be There"

"Black Or White" with Slash (select dates) and Jennifer Batten

"Man In The Mirror"