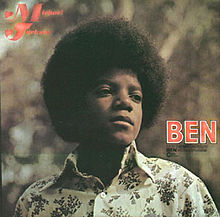 Ben is one of Michael Jackson's songs that's in the album, Ben. This song was released on July 12, 1972 and was recorded in January of 1972. This song was written by Don Black and Walter Scharf. It was originally written for the 1972 movie, Ben, although it is performed by someone else and is only performed by Michael in the credits because he wasn't old enough to see the movie. This song sold 1.7 million in the US.[1][2]

This song is the 1st track listing in this album.[3]

The song gave Michael his first no.1 on the Hot 100 in the States and peaked at no.7 in the UK.