Michael Jackson Wiki
Register
Don't have an account?
Sign In
Advertisement
in: Songs, The Jackson 5, The Jackson 5 songs,
and 5 more

View source
watch 01:36
We're Getting Mutants in the MCU - The Loop
Do you like this video?
Play Sound 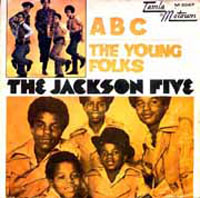 ABC is one of The Jackson 5 songs in the albums, ABC and Greatest Hits. This song was released on February 24, 1970 and was recorded in 1969 in The South Factory of Los Angeles. It was written by The Corporation (Berry Gordy, Freddie Perren, Alphonzo Mitzell, and Deke Richards) and was produced by The Corporation. It was written with the same design as I Want You Back and was first heard on American Bandstand (on the ABC network) in February 1970.[1]